Curator of Sculpture and Decorative Arts 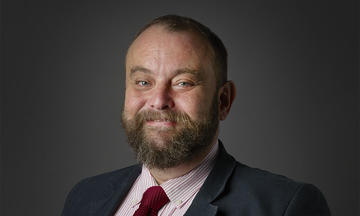 This post is proudly supported by Barrie and Deedee Wigmore.

Research summary
My research interests cover a wide range of European decorative arts from the late medieval to the early 20th centuries. I have extensive knowledge of metalwork, furniture, ceramics, glass, textiles and sculpture. I am also committed to exploring ways of making this material more engaging and accessible to museum visitors.

In my current role, I have become interested in 19th-century design and design reform, in particular the work of William Burges and Christopher Dresser. The Ashmolean holds important examples of their work. I am currently exploring the possibility of an exhibition on colour and the Victorians that will include both fine and decorative arts. I also have a particular interest in 17th- and 18th-century British and Continental silver and goldsmiths’ work. I am actively researching the Michael Wellby bequest – a collection of 500 pieces of Continental goldsmiths’ work and Kunstkammer objects – that was bequeathed to the Ashmolean Museum in 2012. I have extensive knowledge of the history of Kunstkammern, Schatzkammern and cabinets of curiosities of the early modern period and of the revival of interest in such collections in the 19th and 20th centuries that led to the extensive faking and reproductions of precious objects.

In addition to the stylistic history and development of the decorative arts I am keen to explore the social history surrounding such objects – how they were made, used, displayed and their changing uses and status over time. My work on silver and ceramics has led to a particular interest in the history of food and dining.

I am lead curator for the forthcoming ‘No Offence’ exhibition  at the Ashmolean that will explore LGBT+ histories and themes of objects from the British Museum and from across the Oxford University Museums collections.

Biography
I have more than 25 years’ experience working with and researching European decorative arts of the 16th–21th centuries. I started my career at the Victoria &  Albert Museum as an Assistant Curator in the Metalwork and the Furniture and Woodwork Departments. This was followed by seven years as Assistant Curator of Decorative Arts at the Royal Collection. Whilst there, I co-curated several major exhibitions at the Queen’s Gallery at Buckingham Palace and I wrote the Official Guide to Windsor Castle. I was subsequently appointed Curator of Decorative Arts at the Holburne Museum in Bath. During my eight years there I was responsible for the radical redisplay of the decorative art collections as part of the redevelopment and extension of the Museum. I joined the Department of Western Art in March 2014 as Curator of Nineteenth-Century Decorative Arts. In this role I am tasked with building a new collection of 19th-century decorative arts. I recently worked on the redisplay for the Nineteenth-Century Art Galleries that incorporate decorative arts for the first time and on the new Michael Wellby Gallery of Continental Goldsmiths’ work. Since January 2017 I have been responsible for the entire Western Art Sculpture and Decorative Arts collections.

2005 Dining with George III and Queen Charlotte’ in The Wisdom of George III: Papers from a Symposium at The Queen’s Gallery, Buckingham Palace, June 2004, J. Marsden (ed.), London

2005 George IV and the Grand Service in Royal Goldsmiths: The Art of Rundell and Bridge, C. Hartop (ed.), London

2010 Ancient and Modern Gems and Jewels in the Collection of Her Majesty The Queen, London, K. Ashengreen Piacenti (contributor)