The Mediterranean World Gallery examines the Mediterranean region after the division of the Roman empire by exploring the sea and life in some of the principal cities around its shores.

After AD 300, the cities of Rome, Constantinople, Jerusalem, Cairo, Alexandria and Venice were developing their own identities and establishing individual and separate cultures freed from the homogeneity of the Roman empire.

The centrepiece of the gallery is an enormous map establishing the location and situation of the most important sites and cities within Mediterranean history. The chronology of this period is explored through specific timelines illustrating the region’s turbulent history from the rise of Christianity in the Roman empire to early modern times.

One of the key displays in the gallery is the coinage of Sicily showcasing a microcosm of Mediterranean history and the remarkable range, in materials and geographical extent, of Byzantine trade.

Around the wall are cases dedicated to the six principal cities around the Mediterranean shore, featuring fine examples of craftsmanship such as Roman glassware, Venetian pottery, glittering Byzantine jewellery and Orthodox Christian painted wooden icons. There are also more personal and modest objects on display giving a clue to the lifestyle of those who inhabited and travelled in the region. A selection of tombstones from the Jewish section of the Roman catacombs give a poignant insight into lives lost in the community.

Several displays are linked to pilgrimage. A small case set into the central map display shows protective amulets and flasks for holy water which would have belonged to a pilgrim. At the far end of the gallery is a detailed 17th-century model of the Church of the Holy Sepulchre in Jerusalem made of olive-wood with mother-of-pearl inlay which would have been brought back to Europe by a grateful pilgrim. 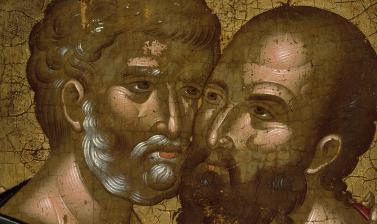 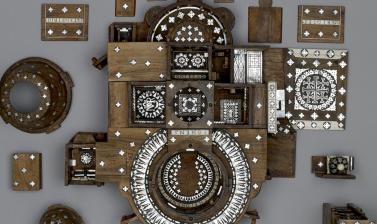 Want to view the other galleries on the First floor?