THE ITALY BEFORE ROME GALLERY

This gallery focuses on the Italian peninsula, before its domination by Romans, when it was a mixture of cultures including Latin, Samnite and Etruscan. These peoples occupied an area rich in metal ores, timber and fertile land, and contributed significantly to urbanisation, law and trade, as well as to the transmission of certain aspects of Greek culture.

Distinctive features of Roman life such as the toga, gladiatorial games, the alphabet, terracotta roof tiles and the Tuscan Doric order were actually Etruscan in origin.

A central cabinet focuses on personal adornment and includes a display describing the prominent role Etruscan women played in public and private life. There is a fine collection of intricately carved rings and intaglios (seals cut deeply to make an impression in wax or clay), showcasing the skill of craftsmen at the time. At the far right of the cabinet is a splendid example of a 7th-century BC bronze fibula (clothes fastener) with a pectoral (chest ornament) of stylised human figures.

A separate wall case charts the pre-Etruscan history of the Italian peninsula and its islands from 3500 BC to 850 BC and the trading links with the Eastern Mediterranean (this link is emphasized by the view through the display to the Aegean World gallery). A small figure of a worshipper carrying a sheep is typical of the Nuraghic culture in Sardinia, which flourished in the later 2nd and early 1st millenia BC. These elongated figures inspired the work of the 20th-century sculptor Alberto Giacometti, just as the marble Cycladic sculpture of the same era influenced Modigliani and Moore.

A tall central display case shows hundreds of delightful examples of Etruscan bronzes including two fine statuettes of warriors illustrating how Etruscan craftsmen adapted classical Greek forms. A separate display on the wall investigates the mystery of the Lucera bronzes. 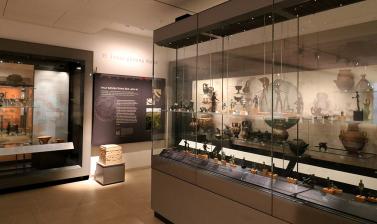 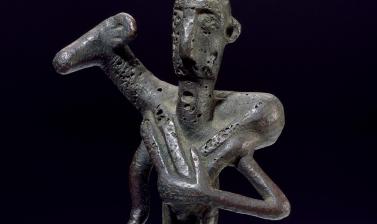 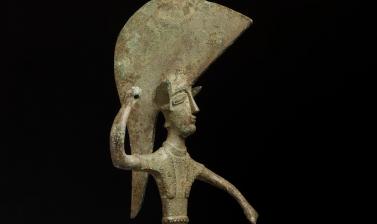 Want to view the other galleries on the Ground floor?