The Ashmolean and Colonialism

THE ASHMOLEAN AND COLONIALISM

The Ashmolean as founded in 1683 was a pre-Enlightenment institution in which objects from around the world were brought together for the study of the natural sciences and varieties of human experiences. It is no accident that its foundation, and the creation of its collection, coincided with the first period of British colonial expansion; indeed, it was a by-product of it. One of its most famous founding objects, ‘Powhatan’s Mantle’, was part of an exchange of gifts between the chief of the Powhatan Confederacy and the English at Jamestown in 1608; Asian objects in the original collection were collected for the Tradescants by traders of the East India Company. The Tradescants’ Lambeth home, which housed their collection of naturalia and artificialia that became the basis of the Ashmolean, was known as the Ark reflecting the idea that all the world was under its roof. This was self-evidently a world with Europe at its centre to be collected, admired, studied and exploited.

The development of the Ashmolean’s collections and the story of its evolution into the Museum of Art and Archaeology it is today is complex. Natural history specimens were transferred to the University Museum of Natural History that opened in 1860. The Ashmolean itself was transformed between 1884-1908. This period saw a focus at the Museum on the emerging discipline of archaeology and, through an amalgamation with the University Galleries, also on the growing European art collections. It coincided with the foundation of the Pitt-Rivers Museum in 1884, which had interests also in archaeology but especially the new field of evolutionary anthropology. The division of the University’s collections between the two museums was shaped by now discredited ideas, which separated people into different races and placed them on a sliding scale of ‘primitive to civilized’, a system that was applied to contemporary as well as ancient societies. The societies of Europe and the lands associated with the Bible (pre-Islamic Egypt and the Middle East) were placed at the top of the scale and their objects came to form the core of the Ashmolean collections. Objects from societies considered less ‘civilised’, including Sub-Saharan Africa, the Americas, Oceania and parts of Asia were collected by the Pitt-Rivers Museum. This division of the collections is still largely in place today. At the time of this division an exception was made for the founding collections which were retained at the Ashmolean where they continue to memorialise the Museum’s founders. 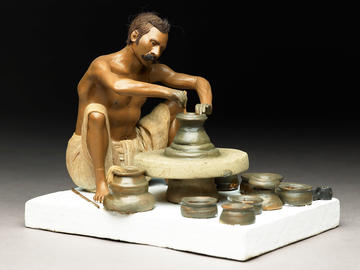 The Ashmolean’s Asian collections have their origins as part of Oxford’s former Indian Institute. There, in the Institute’s Museum, objects from the Indian subcontinent were used to showcase the empire, its people and culture. Built between 1883 and 1896, the Indian Institute was partly established to train British officials for India’s colonial administration. In 1962, the Institute’s collections were finally moved to the Ashmolean in the then newly established Department of Eastern Art.

We believe that museums matter and have an important role to play in society. Museums are places of learning and enjoyment that have the potential to inspire individuals, connect people to their past and create a sense of community and shared humanity. In recognising this importance, we also acknowledge that Museums are not neutral spaces and that they can perpetuate ways of thinking and power imbalances created by our colonial past. We acknowledge the Eurocentrism and lack of diversity in our institution and the fact that as a result the narratives from the perspective of other cultures and people have often been silenced or marginalised and we accept our responsibility to challenge and change colonial mindsets. This is not to erase history but to acknowledge all of history reflecting much broader and more diverse perspectives and narratives.

Since the 2009 redevelopment and redisplay of the collection, the Ashmolean has worked to break down the divisions of the past and to tell stories of a shared humanity. We accept the challenge of continuing to question and review the interpretation of our collection and the need to critically interrogate the history of our Museum and the legacy of colonialism and empire on our collections, our programmes, and our workforce.

We acknowledge the fact that staff and visitors have reported experiencing racism and racist attitudes within the Museum. We affirm our belief that racism has no place in the Ashmolean Museum and we pledge to do all we can to deliver change and remove it. We also recognise that to do so requires structural change through a more diverse workforce and leadership.

While the term, ‘under-represented’ is not ideal, we use it below to refer to people who have been historically excluded within museums.

Teaching the history of art, visual culture, and archaeology offers an opportunity for the self-examination of personal, cultural, and visual biases. The history of disciplines such as the history of art, teaches us that history is often smudged and constructed by our own biases, and that facts and truths are bound by our own limits and personal interpretations, and by those who have the power to construct mainstream narrative.  Consequently, we feel that a robust critique of the lack of diversity within a University Museum is one crucial way in which the Museum can support the University and faculties in their work to address the legacy of colonial history and thinking and in broadening and diversifying their curricula.

We will therefore continue to:

Through its Ashmolean for All Strategy the Ashmolean aims to improve the way the Museum serves, represents, and includes diverse communities and individuals. As part of this strategy, we are committed to diversifying our audiences and offering more inclusive narratives around our collections and more opportunities for participation. In doing so we will assess and confront the colonial mindsets that define the founding assumptions of the disciplines of art history and archaeology and which continue to shape the decision-making processes of the art and archaeology museum.

Within available resources, and as opportunities arise, we will seek to:

The Ashmolean is committed to the principles of Equality, Diversity and Inclusion. Our aim is to create a fair and inclusive workplace with a diverse staff who reflect the communities we serve. We seek to create an environment that embraces and respects difference so that everyone feels accepted and supported to give their best. This work underpins the Ashmolean for All public engagement strategy, and forms a significant component of our commitment to fulfilling our public sector duty of care.

Provenance Research
Since the COVID-19 lockdown in March 2020, as a priority staff have been digitising parts of the Eastern Art Department’s archives, and contacted former Keepers/Curators for provenance details to update objects files. Both Eastern Art and Western Art departments have started the process to address colonial and racist titles and descriptions in the documentation of certain objects in the collections.

This clay model of a potter was part of a large group of figures that were transferred from Oxford's Indian Institute to the Ashmolean. For more information about these fascinating objects, look out for a forthcoming podcast with Dr Mallica Kumbera Landrus, Head of the Ashmolean's Department of Eastern Art.

Read the Museum's vision and mission, find policies and reports, and discover the Museum's management structure and history.