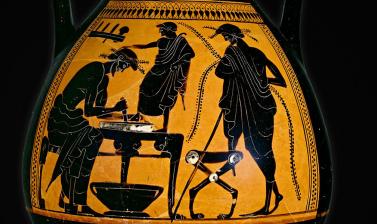 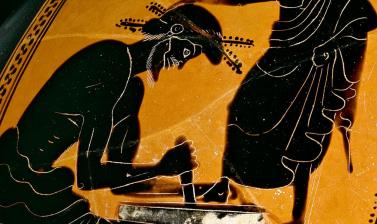 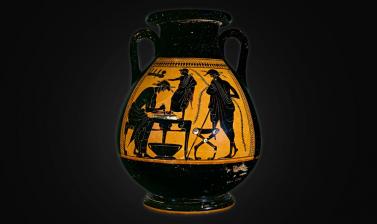 Originating in the Greek city of Corinth during the 7th century BC, the black-figure technique of vase-painting, where the figures are silhouetted in black paint with incised details against an unpainted clay background, was adopted and refined by Athenian craftsmen in the subsequent century, to remarkable effect. This pelike, a jar used for storing wine or other liquids, is attributed to the so-called Eucharides Painter who worked in Athens around 500–470 BC.

On one side of the vase is a scene of satyrs, followers of the wine-god Dionysos, with a goat and an individual, possibly Hermes, messenger of the gods. The scene on the other side, however, explains the vessel’s modern name: the Shoemaker Vase. It depicts a shoemaker cutting out a leather sole around the foot of a customer and provides a captivating glimpse of everyday life in 5th-century BC Athens. The craftsman bends intently over his task while the customer, shown at a smaller scale, balances on the table, resting his hand on the shoemaker’s head. Another man looks on, leaning on a staff and holding branches – he may be the owner of the workshop. White paint has been added to pick out details.

Scenes of craftsmen are relatively rare on Athenian pottery which generally exhibits a preference for heroic, mythical and elite subject matters. Instead, examples have been recovered from Etruria in Italy, while this pelike was found on the island of Rhodes where there was presumably a market for such images.