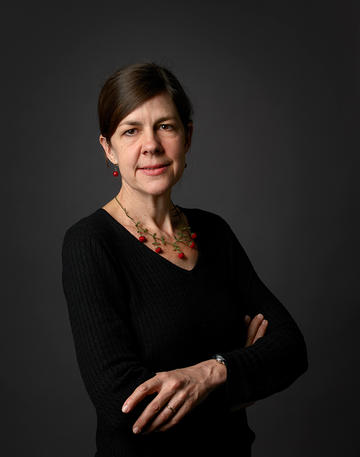 Research summary
My main area of research is the decorative arts of the Meiji era (1868–1912), in particular the work of the versatile potter Miyagawa Kozan (1842–1916), through which I have explored the momentous changes in Japanese ceramic production after the opening of Japan to the West in the mid-1800s. I have recently become interested in Meiji ornamental textiles and sculpture and am currently planning an exhibition on the emergence of modern Japanese art in the late-19th to early-20th centuries. I also have an interest in Japanese prints, including landscape prints by Utagawa Hiroshige, surimono privately published poetry prints and the new print styles that developed in early-20th century Japan – Shin Hanga (new prints) and Sosaku Hanga (creative prints).

CV
Clare Pollard is Curator of Japanese Art at the Ashmolean and an associate member of the Faculty of Oriental Studies. After gaining her doctorate at Oxford University in 1996 on the subject of Japanese potter Miyagawa Kozan (1842–1916) and the development of Meiji ceramics, she worked for seven years as Curator of the East Asian Collections at the Chester Beatty Library, Dublin, with a Monbukagakusho visiting research fellowship at Tokyo National Museum in autumn 2000. At the Chester Beatty Library she worked on the redisplay of the collections in a new museum building in Dublin Castle, which was awarded the Gulbenkian/Heritage Council Irish Museum of the Year Award 2000 and European Museum of the Year Award 2002. In 2004 she became Curator of Japanese Art at the Art Gallery of New South Wales, Sydney, before returning to the Ashmolean in April 2006 to start working on the Ashmolean’s redevelopment project. She is responsible for two permanent galleries of Japanese art and has organized a number of temporary exhibitions highlighting aspects of the collections.

I am currently preparing a major exhibition focusing on the emergence of modern Japanese art in the late-19th to early-20th centuries and co-authoring a catalogue of the Ashmolean’s surimono print collection, in conjunction with a touring exhibition